Remy van Kesteren leans back in his chair, in the garden of the Lioba nunnery in Egmond (the Netherlands). Remy was invited to speak here by his previous harp teacher Erika Waardenburg, who’s teaching a weeklong international course to ten talented harpists. Remy van Kesteren, who has grown from a ’wunderkind’ to a world-class harpist, is completely comfortable here, with the soft and gracious sounds of the harp drifting from the practice rooms as background music to these peaceful and spacious surroundings.
Remy van Kesteren lives harp. Or, as he puts it himself, "When I first saw a harp at the age of five and heard the beautiful sounds it made, I was fascinated. My mother, who played the flute, was with a friend who was playing the harp. I sat there listening breathlessly for an hour. Right then, I knew it had to be my instrument. I felt it immediately: the harp and I are inextricably connected with each other." "It was actually very natural. From the time I was a baby it was clear that I wanted to make music. Intuitively, I chose the harp, a splendid, elegant instrument. The harp is an instrument with a kind of angelic, feminine image, but it also has its masculine, tough, raw and dark sides." When his parents realized that this wasn’t littly Remy’s momentary infatuation, but "true" love, they bought him a small Irish harp, but with a few years he’d grown out of it. Soon he was playing on a smaller-sized pedal harp. At the age of ten he was admitted to the conservatory in Utrecht, in the "young talent" class, taught by star harpist Erika Waardenburg, and was giving his first concerts. In 2009, he had already been named "Young Musical Talent of the Year" and he had won the third prize at the renowned International Harp Competition in Israel. His career took off, with concerts in Brazil and several African countries, playing for the baptism of Dutch Princess Amalia at the age of fourteen, and at sixteen his debut in Amsterdam’s Concertgebouw, and a performance in New York ’s Carnegie Recital Hall. He also makes frequent appearances at the Grachtenmuziekfestival in Amsterdam, where he almost feels he is one of the family. And we mustn’t forget his spectacular performance during The Night of the Proms in 2012,where the audience was transported by his colourful playing. Remy van Kesteren is a sound artist, a colourist. 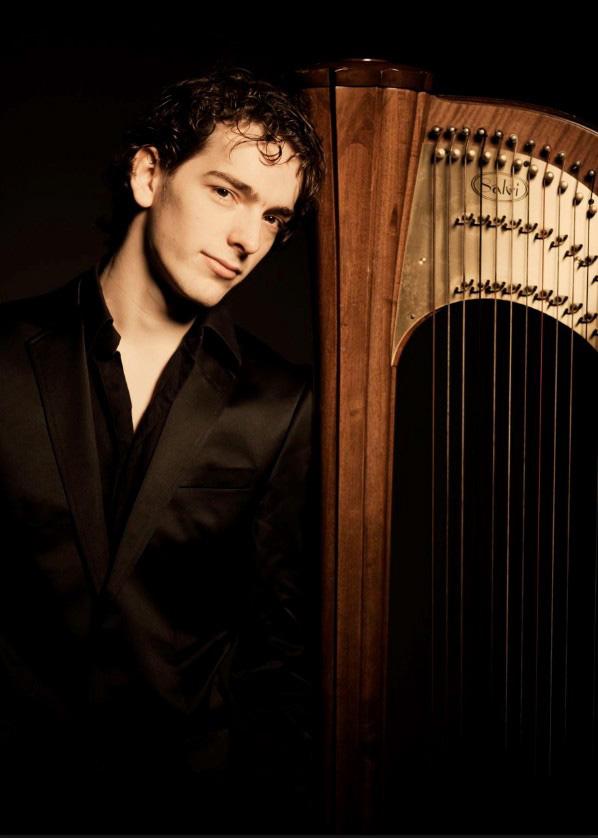 In between concerts, he founded the group Trio42 along with Merel Vercamme (violin) and Christiaan van der Weij (saxophone), and has been touring with them in the Netherlands and abroad. These three very different instruments, whose sounds blend subtly, make the ensemble a unique combination in chamber music. With this trio as well, Remy van Kesteren shows his versatility and drive to distinguish himself. In 2010, at the age of 21, Remy graduated summa cum laude from the Utrecht Conservatory. Actually, Remy’s entire musical life is rather summa cum laude, since he goes from one success to the next. A few years later, he finished at the Amsterdam Conservatory with the highest honors, and both during and after his studies, he won important competitions like the Princess Christina Competition, the Netherlands Harp Competition, the Elisabeth Everts Prize for exceptional young talent and as a milestone, in 2013, the prestigious American International Harp Competition, winning a gold medal and - not bad either - a golden harp as a reward (the latter is still on a ship on its way to Remy). And recently he won Amsterdam’s Grachten Music Festival Prize 2013.
After his studies in Utrecht and Amsterdam, he continued to study at the Conservatoire National Supérieure de Musique de Paris, for another six months of study, which was actually more philosophizing about his work, his attitude, and harp music, and with no one less than Isabelle Moretti, one of the world’s greatest living harpists. After thirteen years studying with world-class harpist Erika Waardenburg, why not a little visit to her famous colleague Madame Moretti? Remy says:”Isabelle Moretti mainly taught me to be patient.
The ideas, the sounds, the’re all-in you and they will come out sooner or later; you can’t force them out. We spent more time talking than playing music - that’s very precious.” Remy is also taking composition lessons from Willem Jeths, because he wants to write music for the harp himself. “Willem Jeths is a fantastic composer; he writes wonderful music.” Adventurous, internationally oriented, innovative and always on the lookout for new ideas, Remy also co-founded the Dutch Harp Festival in 2010, and he is its artistic dirtector. Like his instrument, Remy himself is passionate, sometimes out of control, but he also comes up with very daring ideas in a rapid tempo (also a summa cum laude in ambition). Remy can just manage to keep up with himself. “Sometimes it’s all a bit fast,” he says. “But it has to come out. The ideas keep coming, and I want to make them into reality as long as I can. It gives me so much energy.” His energy is infectious, and has been caught by some of the Netherlands’ top performers, like writer/poet Kees van Kooten, quite a name in the Netherlands, with whom he’ll produce a programme on language and music in 2014, as well as the godfather of choreography, Hans van Maanen, also a ballet dancer and photographer), who asked Remy to write music for a ballet with him and the National Ballet next year. “When you are 24, having a drink with the legendary Hans van Maanen, is a celebration,” says Remy. 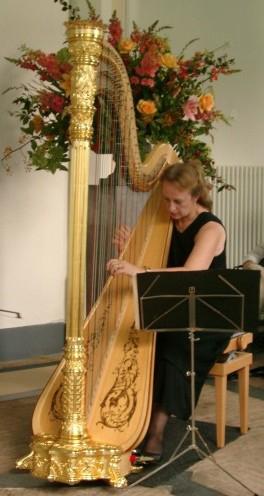 Professor Erika Waardenburg, a prize-winning internationally famous harpist and an exceptional harp teacher, taught for decades at the conservatories of Utrecht, Amsterdam and Helsinki. She has worked with conductors such as David Porcelijn, Graham Jenkins and Ernest Bour.
Erika fell in love with the harp - a serene, sonorious instrument that stands a bit alone as far as design and sound colour go - when she was four. She studied at the conservatories of Utrecht and Brussels, where being in an international class enabled her to get to know many different styles. She learned the fine points of playing harp from Edward Witsenburg and Susanna Mildonian. She graduated with distinctions of the highest classes, the Premier Prix and the Prix d’Excellence. You can’t get any higher than that, at least not on earth.
At the age of 23, she won the prestigious international Gaudeamus Competition for contemporary music and “De Vriendenkrans”, a distinction awarded by the Concertgebouw Amsterdam. Erika Waardenburg has given harp concerts all over the world and is known for her versatility, playing the familiar Romantic repertoire as well as less well-known pieces by composers such as Murray Shaefer, Alberto Girastera and Jacqueline Fontijn. Like Remy, Erika crosses boundaries and doesn’t like to be pinned down to fixed patterns or traditions. Erika is primarily concerned with placing the harp in a new perspective in modern music literature. She shows herself to be a visionary musician, no longer interested in the well-known paths. Waardenburg also gives master classes for young talented harpists, both within and outside the Netherlands, for example at the Mozarteum in Salzburg and the Royal Academy in London. Her greatest accomplishment in her teaching career is the founding of the young talent class, enabling very young harpists to study under her guidance, raising their standards to unprecedented heights.

For years, she has helped put harpists such as Remy van Kesteren, the originally Korean harpist Lavinia Meijer, Gwyneth Wentink from the Netherlands and Germany’s Miriam Overlach on the path to successful careers.

Erika Waardenburg (60) is Vice-President of the Dutch Harp Association and co-founder and artistic director of the Academy for Musical Talent in the Netherlands, which has existed for about eighteen years. Erika is known for expanding the harp’s repertoire. “Lavinia Meijer is also a really huge talent. She’s the first to have given a recital in Amsterdam’s theatre Carré, which they’ve never had before.” Her task with the Dutch Harp Association is to promote harp music, organize the triennial competitions, holding meetings, and encouraging composers to write harp music. Erika:”We also invited particular harp makers; Lyon and Healy is a major brand in America and Salvi’s big in Italy, where there’s also the Salvi harp museum. The harp makers tell some impressive stories about building the instrument. There are no pedal harps made in the Netherlands, only small Irish harps.”

Remy van Kesteren: ”There’s nowhere I feel as fine as on stage when I can play.”

Remy van Kesteren is busy becoming one of the world’s greatest harpists. Erika Waardenburg: “The great harp legends are Nicanor Zabaleta, who sold millions of records in the last century. Rosa Spier was also very famous in the Netherlands. After I won the Prix d’Excellence I was one of the world’s greatest, like Phia Berghout and Edward Witsenberg. And now it’s time for Lavinia Meijer, Gwyneth Wentink, Miriam Overlach and Remy. Remy is already at my level and what’s more, he’s getting even better. He just started working on the Dutch Music Prize, comparable to the Prix d’Excellence, which no longer exists.” Remy adds: “Right now I would say that the very best harpist in the world is Isabella Moretti, whom I have studied with. She’s also had a lot of incluence on me as a colourist, in creating sound effects. French people are masters of tone like no others. I think they have the best tone on the planet. It’s the most refined music, with the most nuances. The problem with the French school is that they often forget that there’s also depth in the sound, that there can be darkness in it as well. It doesn’t always have to be light and refined, but it can actually be very beautiful to have dark and deep sounds. The most difficult thing in music making, and I think this is true for any instrument, is playing softly and making sure that even really soft notes can be heard perfectly at the back of the hall, but are still perceived as very intimate and small, even in a big concert hall. I have worked a lot on that with Erika and refined it even more.”

“My musical ideas were way ahead of my technique”, Remy van Kesteren says. “I really learned everything from Erika. She taught me about classical music and about technique. I think it is important to have a good warm, round tone, and good volume, but not to play too carefully. And if there’s one thing Erika’s good at, that’s supporting each student as an individual. She helps them to become the best possible version of themselves, instead of what some teachers do, which is to make students little clones of themselves. One of the things I learned from her is discipline; right now I practice seven hours a day. I also had a lot of imagination. My musical ideas were way ahead of my technique. I would want to play certain notes that were in my head, but technically I didn’t know how. Before Erika, I had a really wonderful teacher, Loes Slingeman, who told me a lot about music. She loved telling stories, and Irish folk music is all about stories. That’s very appealing to kids. I mainly managed to become a storyteller with the harp, without reading music, which came later. That really helped develop my musicality.”