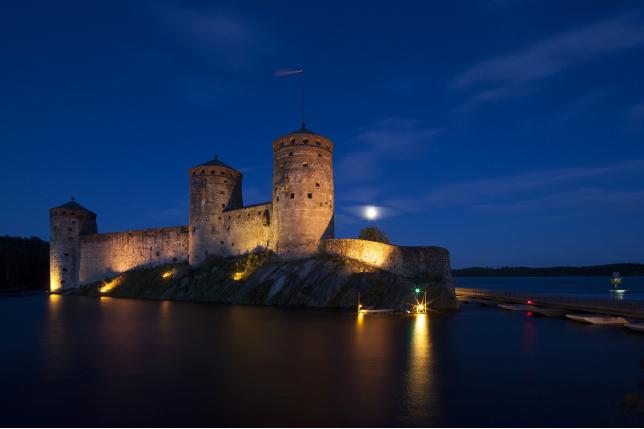 St. Olaf’s Castle ( or Olavinlinna Castle) near Savonlinna, Finland, is one of the most beautiful historical and cultural buildings in Finland, also known as the land of a thousand lakes. In reality Finland has about 188,000 lakes, the largest being Saimaa Lake. Its English name Finland means “fen-land”, and the country was named for its many “high fens”. The country’s name in Finnish, Suomi, means the same. The territory we know now as Finland was first settled shortly after the end of the Weichselian period, around 8500 BC. From 1200 CE to 1809, Finland was a part of the Swedish empire. In 1809 Finland was conquered by Russia, and what was known as a personal union of the two countries was created. In 1917, Finland declared its independence. This was recognised in 1918 and the Republic of Finland was born.

St. Olaf’s castle is famous for its rich and dramatic history and ambience, as well as for its annual opera and ballet festival, Savonlinna Opera Festival. The 15th-century fortress is situated in splendid surroundings. Construction began around 1475 near Savonlinna in the south of Finland, about 400 kilometres north of Helsinki. Since it is protected on all sides by water, it is also called “the water fortress”. The Danish-born founder of the castle, Knight Erik Axelsson Tott, decided that a powerful fortification should be built to protect the strategically important Savio region. The castle was intended to repel Russian attacks from the east and to guarantee the Swedish Crown control of the Savo region. The history of Olavinlinna is a mixture of medieval weapons clashing, cannons roaring and everyday chores inside the security of the castle’s thick walls. The changes in ownership of Olavlinna Castle can be seen in its varied architecture. There are two small exhibitions in the castle: the Castle Museum,displaying artifacts found in the castle or related to it, and the Orthodox Museum, with icons and other religious artifacts from both Finland and Russia. Olavinlinna, a castle with three circular towers instead of square towers, is the northernmost medieval stone fortress still standing. The castle is built on an island in the Kyrönsalmi strait, connecting lakes Haukivesi and Pihlajavesi. It was the first Swedish castle with a set of thickset circular towers able to withstand cannon fire. It is not by accident that the castle was built in a network of lakes and waterways, for they would seriously impede a potential Russian offensive. Olofsborg (the castle’s Swedish name) withstood several sieges by the Russians during the First and Second Russian-Swedish wars. A brisk trade developed under the umbrella of the castle towards the end of the 16th century giving birth to the town of Savonlinna, which was chartered in 1639. The castle forms a spectacular stage for the Savonlinna Opera Festival, held every summer since 1912.

Defending the former Kingdom of Sweden from Russian invasions

St. Olaf’s Castle was built as a fortress to protect the eastern border from Russian invasions. Regional defence was the responsibility of the Crown castles, which also served as administrative centres. St. Olaf’s Castle, built next to the border of the Swedish-Danish Kalmar Union, was named after the patron saint of knights, St. Olaf. The castle withstood several sieges by the Russians before capitulating in 1714. Today the castle’s halls and rooms can be rented for all kinds of events even in winter, since there is electricity and heating in the halls where people want to stay or hold events. General manager (keeper) of the castle Jouni Marja-mäki, has been managing the historic castle for over two years. “I am in charge of how the castle functions, public services, and organizing events and exhibitions. “I am also the keeper of another castle in Finland, which is Häme Castle, also a medieval castle, located on the coast of Lake Vanajavesi. I studied art history in Helsinki and I have a passion for old buildings, castles and cultural history. I have always been greatly interested in architecture.

I started to work at the National Museum as a curator, and eventually I was given a higher position and became the keeper of two castles.” Olavinlinna Castle was built as a fortress, not for the royal functions. The only Swedish king ever to visit the castle was King Gustavus Adolphus II of Sweden in 1622. Jouni Marja-mäki explains:”It is not a fancy castle, but a means of defence at the border between - at that time - Sweden and Russia. Olavlinna Castle does have a King’s Hall, because in Sweden at the time a castle had to also have a room where the king could receive his guests and to hold meetings. The charm of the castle is its location in a very beautiful scenery, on a rocky island.

It fills the island, and is near two lakes, with a very strong current between them. The lake never freezes over, because of the strong currents. It is a most singular environment, with beautiful nature around you. Also, when you walk in, you feel the authentic atmosphere. In a way it is very masculine and rough. One has to enter the castle with a guide, because it is very narrow, with spiral and steep staircases, and you can easily get lost inside.” The castle has remained a water fortress, with the only access by boat or by bridge. The castle was connected to the mainland by wooden pontoon bridges. These floating bridges were maintained until 1857, when they were destroyed by a storm. New pontoon bridges were put into use in 1974. The ground floor of the Watergate Bastion contains eight vaulted casemates with gun ports. A casemate is a covered shelter for guns and soldiers.

The power of a dynasty

Erik Axelsson Tott, the founder of St. Olaf’s Castle, became administrator of all the Swedish Eastern Lands and keeper of three castles: the Turku, Häme and Viipuri Castle. He was now one of the most powerful men in the union state, and under his influence the Axelsson family dynasty became a major political force. Erik’s connections with Tallinn in Estonia influenced his plan for reinforcing the eastern border defences. 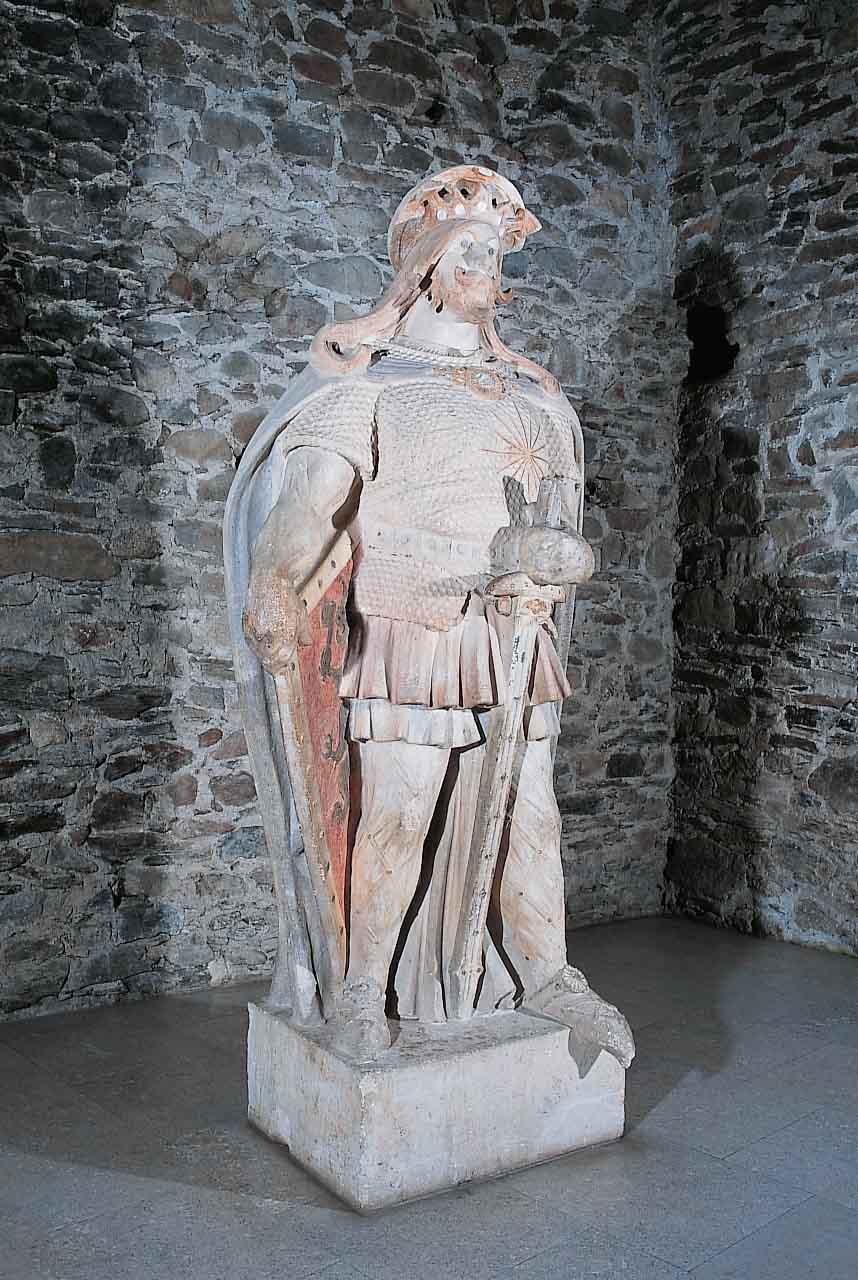 The castle was built close to the midpoint of the Saimaa lake system, at the spot where the upper and lower lakes are joined by three channels navigable by boat. A small, rocky island in the Kyrönsalmi channel was chosen as the most suitable building site because of its strategic location and topography. Rondelles or round artillery towers became popular in the Kingdom of Sweden in the late 15th century. They could withstand the battery of enemy fire better than straight walls. From 1743 to 1847 St. Olaf’s Castle was a Russian fortress. General manager Jouni Marjamäki:”Russia captured the castle twice, once in 1714. They occupied the castle for 7 years until 1721, and the second time in 1743, the Russians conquered the castle again and built bastions and other structures. In 1807 the whole of Finland became part of Russia, as an autonomous province, and the castle lost its importance. In 1800 it became a prison for some time. From 1860 it gradually became more attractive to tourists and from 1917, when Finland became a Republic, it was a Finnish castle. From 1912 until today it has been a world-famous stage for renowned opera and ballet performances.”

The Savonlinna Opera Festival in St. Olaf’s Castle: more than a 100 years tradition of operatic art


The Savonlinna Opera Festival in Finland, held annually since 1912 in St. Olaf’s Castle, celebrated its 100th anniversary in 2012 with a look back at its rich opera tradition, which achieved world-wide fame and which was attended by many world-famous opera singers and opera companies. The birth of the Savonlinna Opera Festival is closely connected to the rise of Finnish national identity in the early 20th century. In 1907, the year in which Finland saw its first democratically elected parliament, a political assembly was held in St. Olaf’s Castle. The famous Finnish soprano Aino Ackté (1876-1944) was also present.

Finnish opera legend Aino Ackté studied at the Paris Conservatoire and was the first Finnish opera singer to achieve international fame. She made her debut in 1897 in Paris, with the National Opera, to great critical acclaim. During her career she performed many great roles including Marguerite in Faust (Charles Gounod), Elsa in Lohengrin (Richard Wagner), Tosca (Puccini) and Salomé (Richard Strauss). During her visit to St. Olaf’s Castle she immediately saw the potential of the medieval castle and the “supernatural beauty” of its romantic surroudings as the ideal location for annual opera festivals, which could ultimately be a world-famous attraction. In Aino Ackté’s view St. Olaf’s Castle was “the perfect stage for the Finnish music just bursting into flower.“ She also saw an opportunity to put Finland as a nation on the musical and cultural world map, saying:”The Olavinlinna opera season will, as an annual event, gradually direct floods of foreign tourists to our country. In this way, too, Finland will become better known, and so will Finnish art, performed in the heart of Finland. Who knows how big a foundation stone for the future has been laid with the Olavinlinna opera week.” Aino Acké became the festival’s founder and its driving force. The first Opera Festival in St. Olaf’s Castle was held in summer 1912. Aino Ackté did as she had promised and turned the castle into a stronghold of operatic art. The famous soprano performed herself as well during the first festival, singing the title role in Erkki Melartin’s opera Aino. She performed again in 1913-16, singing five operas by Finnish composers, and finally in 1930 she was the stage director of two operas. The 1930 festival was the last festival of Aino Ackté’s era. In 1930 the festival went on to stage its first world premiere, the Singspiel Talkootanssit (The Village Dance) by Illmari Hannikainen. The only opera by a non-Finnish composer was Charles Gounod’s “Faust”, a natural choice since the leading female role of Marguerite was one in which Aino Ackté had excelled on the world’s great opera stages. In 2012 the Savonlinna Opera Festival celebrated its centenary with new premieres and great classics. The Festival began on July 5 with an Anniversary Gala starring nearly 20 top soloists, the Savonlinna Opera Festival Orchestra and Choir. Opera directors from all over the world brought greetings to this unique concert. Years of waiting have been rewarded on July 15 when Karita Mattila, the leading Finnish operatic soprano, returned for a concert in Olavinlinna Castle. Kimmo Hakola, a frontline contemporary Finnish composer, used an original libretto by Juha-Pekka Hotinen to create a tragic-comic opera buffa set in one of Europe’s most legendary opera houses: La Fenice in Venice and the second, devastating fire that destroyed it 15 years ago. Another impressive opera was Free Will, the first opera produced by the Opera by You community created via the Inter