(English subtitles can be switched on)

"PELLEGRINI HAS TO SHINE WHEN THE MAURITSHUIS REOPENS" 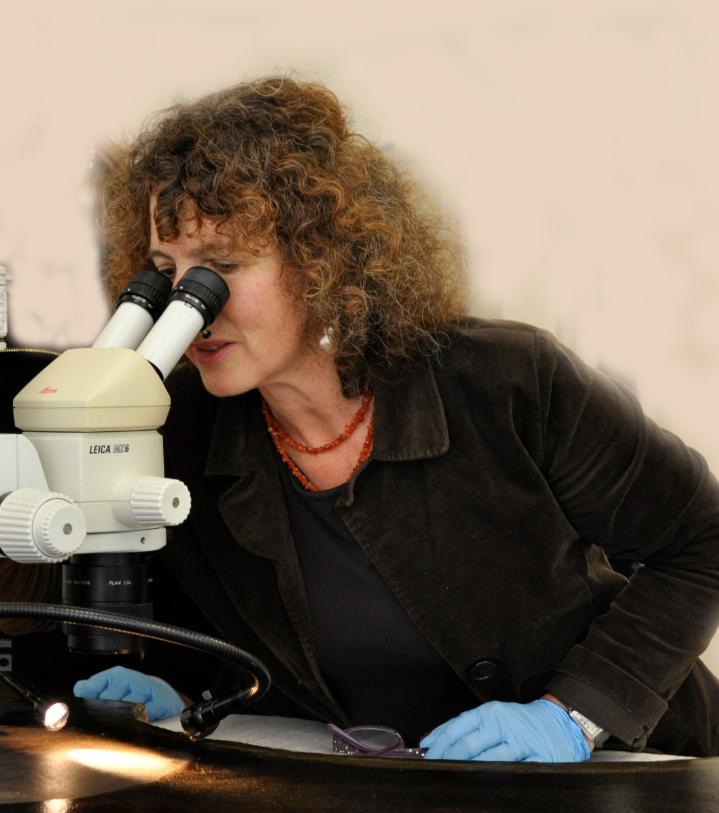 Senior conservator Carol Pottasch and her team  have been working hard on the restoration of the Pellegrini paintings to be in time for the big event of 2014: the reopening of the Mauritshuis Royal Picture Gallery. Carol Pottasch is leading the Pellegrini project, an intensive restoration, which requires four people working full-time for one and a half years, from 2012-2014.

The ambitious extension and renovation project of the Mauritshuis in The Hague (Netherlands),  founded nearly 200 years ago, started in 2012, was designed by Hans van Heeswijk architecten and is due for completion mid-2014. This project, the 'Mauritshuis building for the future' master plan, will substantially enlarge the Royal Picture Gallery by linking the existing museum, the former city palace built by Count Johan Maurits of Naussau-Siegen, with the building across the street at Plein 26 by means of an underground foyer. Thr 17th-century city palace will also be completely renovated. The underground foyer is six meters below street level but looks very bright and spacious thanks to the daylight reaching it from many different directions. Visitors will  reach the foyer by lift or stairs from the open space in front of the museum, allowing them to get a good impression of the route to be followed during their visit. Apart from the addition of 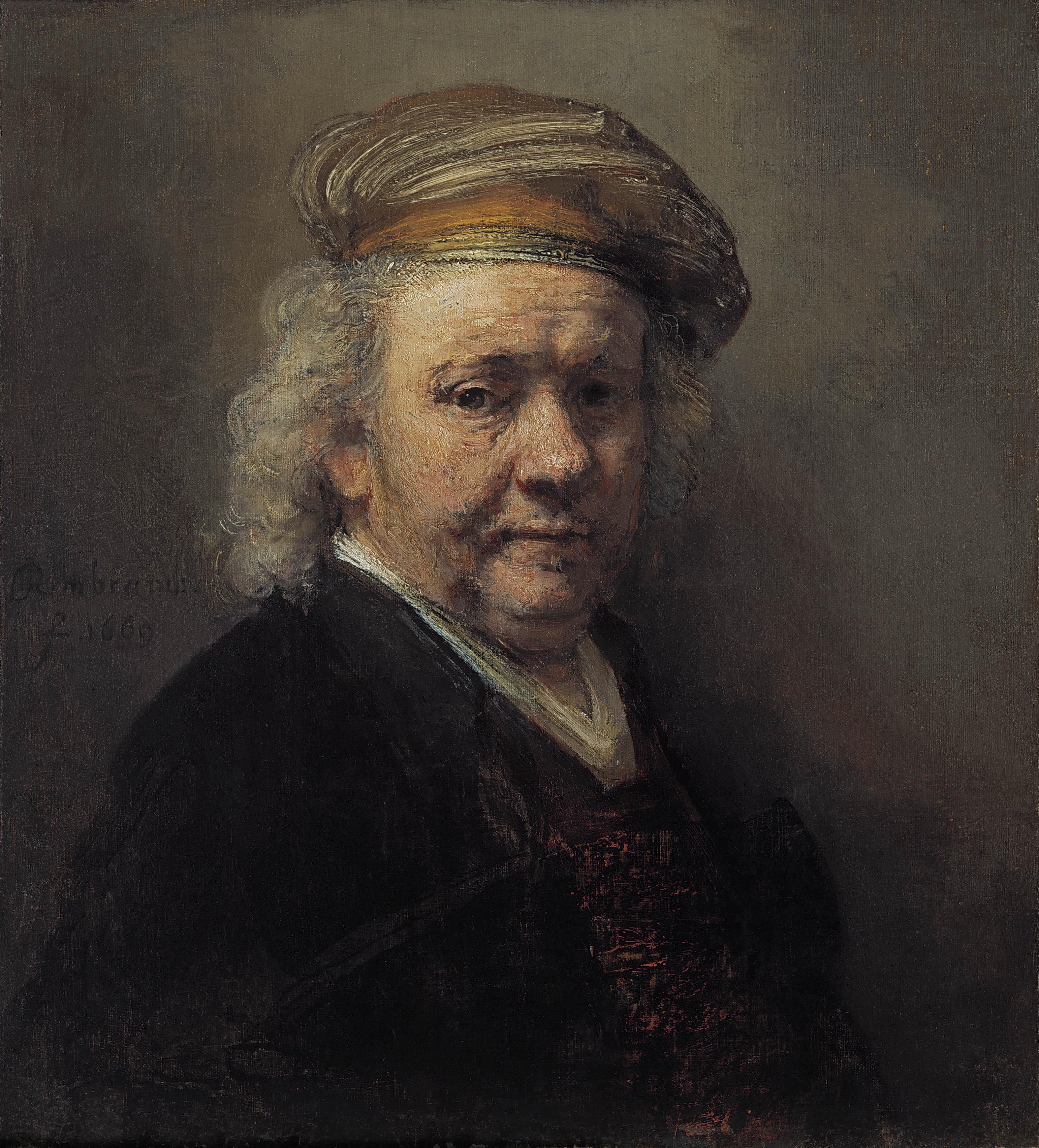 new exhibition space, an auditorium and education area rooms, the museum's facilities such as the entrance lobby, shop, restaurant and cloakroom will be enlarged and upgraded to meet 21rst-century requirements. The Royal Picture Gallery Mauritshuis is renowned for its superb collection of paintings from the Dutch Golden Age. The collection, one of the oldest in the Netherlands, has grown from its original size of 200 to 800 paintings. All the great masters from the Dutch Golden Age are represented by some of their best and best loved works, such as Rembrandt's The Anatomy Lesson of Dr. Nicolaes Tulp, Vermeer's View of Delft and Girl with a Pearl Earring and the public favorite, The Goldfinch (Het puttertje) by Carel Fabritius. The museum also owns a striking collection of Flemish old masters such as Rubens, Jan Brueghel the Elder and Van Dyck and portraits by Holbein. The interior of the museum is remarkable too, the paintings being displayed in the intimate setting of a 17th-century city palace. While the museum is closed for renovation around 100 masterpieces from the collection will be displayed in the Gemeentemuseum (Municipal Museum) in The Hague, to ensure continuity. At the same time a selection of paintings will be on tour in Japan, the United States and Italy. One of the travelling paintings is Vermeer's Girl with a Pearl Earring.

One of Rembrandt's many self-portraits

The restoration of the Pellegrini paintings by Carol Pottasch and her expert team of conservators, is a costly project.  Carol explains: "The restoration of the Pellegrini paintings is being done in a temporary workshop outside The Hague. We are working on this project  with a number of people, staff and temporary conservators, and conservation scientist Annelies van Loon. The renovation of the Mauritshuis formed the perfect opportunity to treat the important, large ensemble by the Italian master. Because for safety reasons the paintings had to be removed from the Golden Room."

Pellegrini was born in Venice in the late 17th century. For several years he worked in England, decorating palaces and country houses. He was very successful. Altogether, fifteen pictures were painted. Three of them - Aurora, The Dwindling Night and Apollo - were for the ceilings.Two paintings hang above fire places, four paintings of statues and six tondos with flowers were built into the paneling. These paintings form a fantastic ensemble. The restoration of the paintings primarily consist of removing the non original varnish layers, which have been discoloured badly over time, and other non original material on the surface of the paintings. After removal of these layers the original paint and the colouring are better visible.

In September 2012, a very special project began - the large-scale restoration of the Pellegrini paintings from the Golden Room of the Mauritshuis. The work is being done in conjunction with and sponsored by with Shell Technology Centre. The Italian artist Giovanni Antonio Pellegrini painted the works in the Golden Room during the early eighteenth century, after the original 17th-century decoration had been destroyed by a fire. Since the paintings had to be removed from the Mauritshuis while the museum was undergoing its current extension, they were taken to a temporary workshop large enough to treat work of this format. In total the work involves 34 square meters  of canvas.

Project leader Carol Pottasch says: "Before we started the 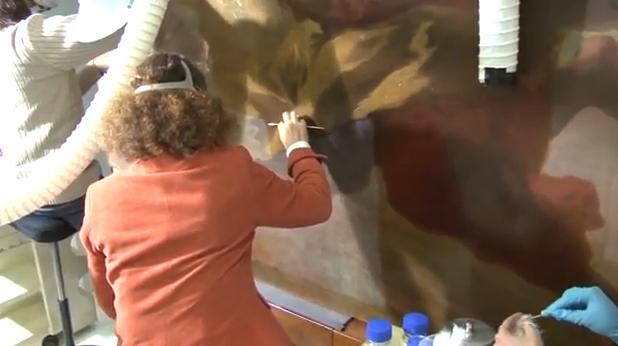 treatment, we examined the paintings intensively. The research involved using a stereomicroscope, infrared photography, UV fluorescence and other methods. The most important part of the treatment  was  to remove the aged and discoloured varnish layers  and several layers of dirt and other non original layers."

"In the 17th century oil paints were commonly used; they enabled the artist to work much faster and spontaneous than with egg tempera that was used until the 16th century. The paint could be used thin and transparent or thick and creamy. As paintings age, the paint surface changes. The roughness of the surface, like sandpaper, scatters the light and the paint loses its saturation." 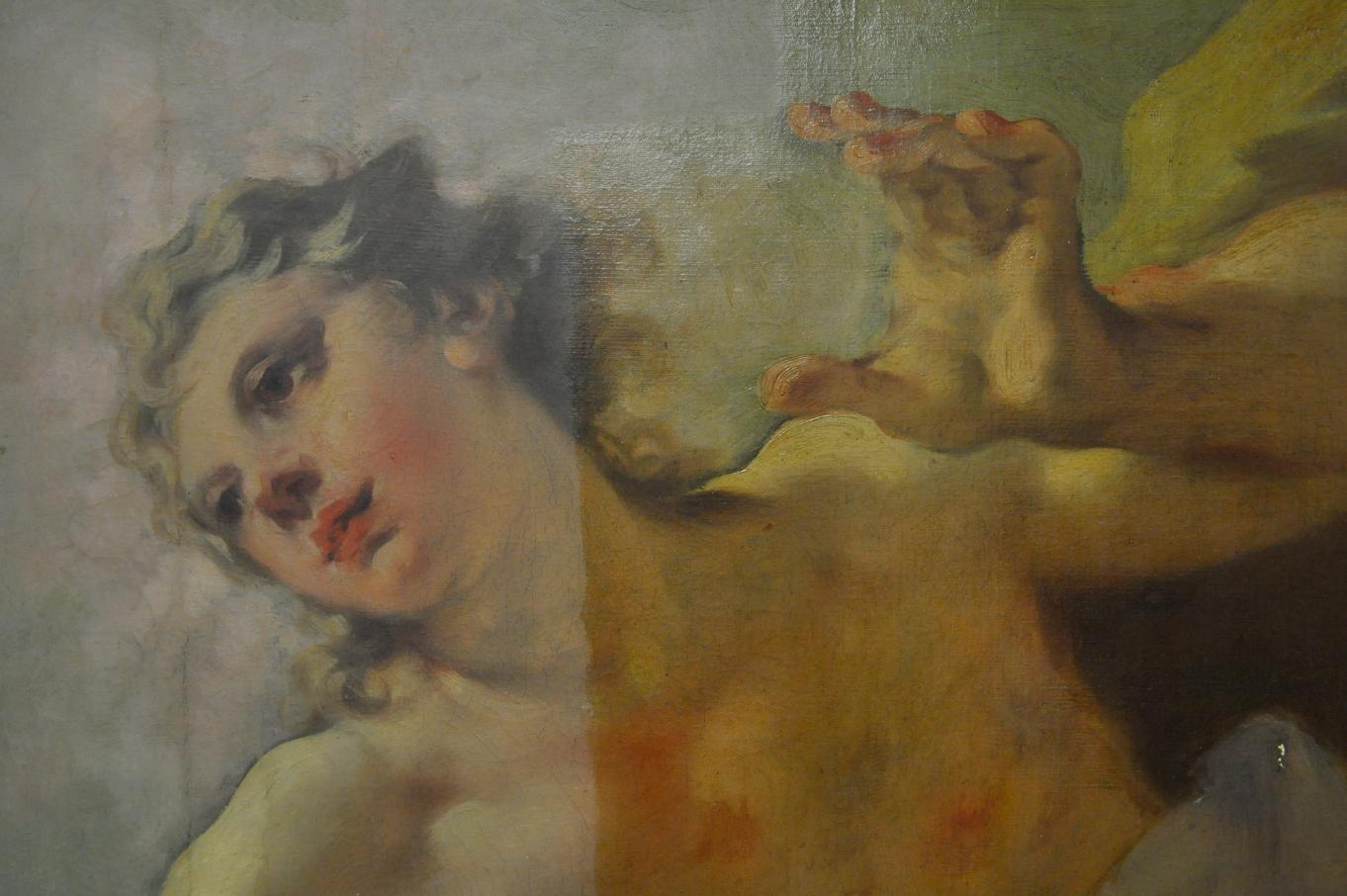 "Therefore a layer of varnish is put on, to protect the painting and also to saturate the paint layer. The disadvantage of the varnish layer, however, is that it loses its transparency and turns yellow over time. This process actually begins on day one, and you start to see a discolouration after ten years depending on the thickness of the layer and the kind of varnish that was applied. We knew from the restoration documentation that the Pellegrini paintings had varnish layers varying from 50 to 100 years old. They were applied in several layers and were quite thick. For this project we worked closely together with several chemists from the Shell Technology Centre Amsterdam in their laboratories with advanced equipment. Here we could analyse minute paint samples and study the original paint and we were able to analyse the non original layers on the paintings. Their help was invaluable.”

Figures standing in niches
Four of the paintings that are built in the paneling show figures standing in a niche imitating sculptures. Throughout history painters have imitated sculptures like this. “What’s interesting about these paintings is that  when the varnish layer yellows, you lose a sense of perspective and the effect of seeing a real statue 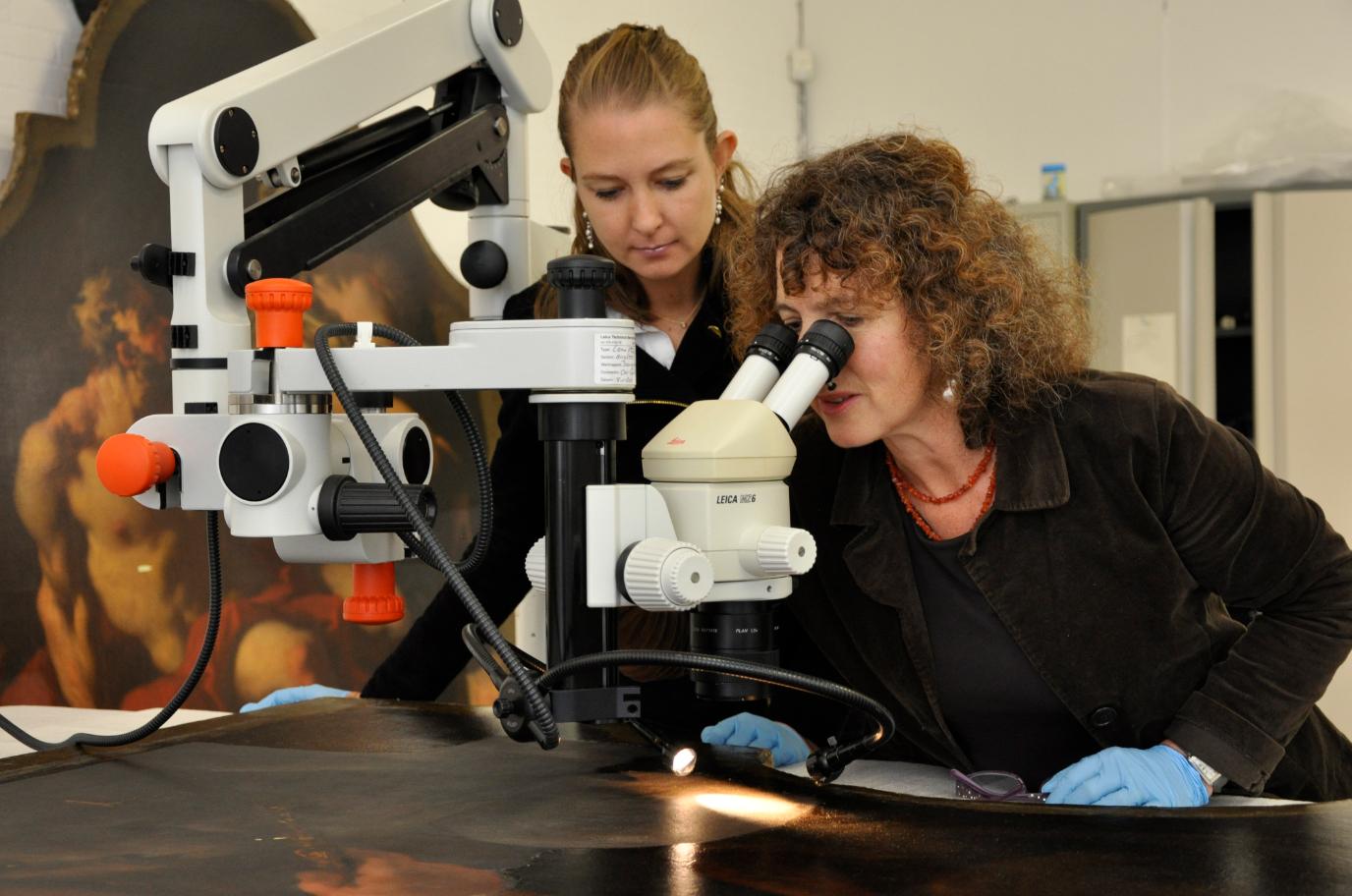 is gone. But when you remove the discoloured varnish layers you see interestingly that the sense of depth returns. Especially if you look at one from a bit farther away, you feel like you are looking at a real statue in a niche.  All the  paintings had a very discoulored varnish layer so the effect of the colourful paintings in the room will be substantial.“

Carol Pottasch continues: ”We started the treatment in September 2012, and we have to finish before the reopening of the Mauritshuis in mid-2014. It will be a lot of work,but I think we’ll be fine. It’s been a difficult project, though, with interesting  technical and art historical problems. The art historical issues lay in the subject matter and the authenticity of some of the paintings in the ensemble: we do not know whether Pellegrini painted the flower paintings. Some of the details that now become visible again will help in identifying the subject matter.  Pellegrini’s painting techniques will naturally be part of the research. Another aim during this project is to collect information on the original colours of the Golden Room. We will do this together with art historian Margriet van Eikema Hommes who works on a  NWO subsidized study on an integrated technical, visual and historical study of 17th and 18th century Dutch painting ensembles. By studying the edges of the paintings carefully we hope to find  the information about colours of the original frames. The reason that we like to know what the Golden Room looked like is that the Pellegrinis in The Hague are  among the few of his works that are still in situ. Many other works have been relocated. So what we have here is pretty special. After close examination  we determined that the structural conservation of the paintings was sound. All the paintings  had been relined, that is, another piece of canvas was put on the back for support, at a previous date varying from 50 to 120 years ago. We determined that the varnish layer had to be removed and that quite a lot of retouching would be needed."

THE ART OF ART RESTORATION 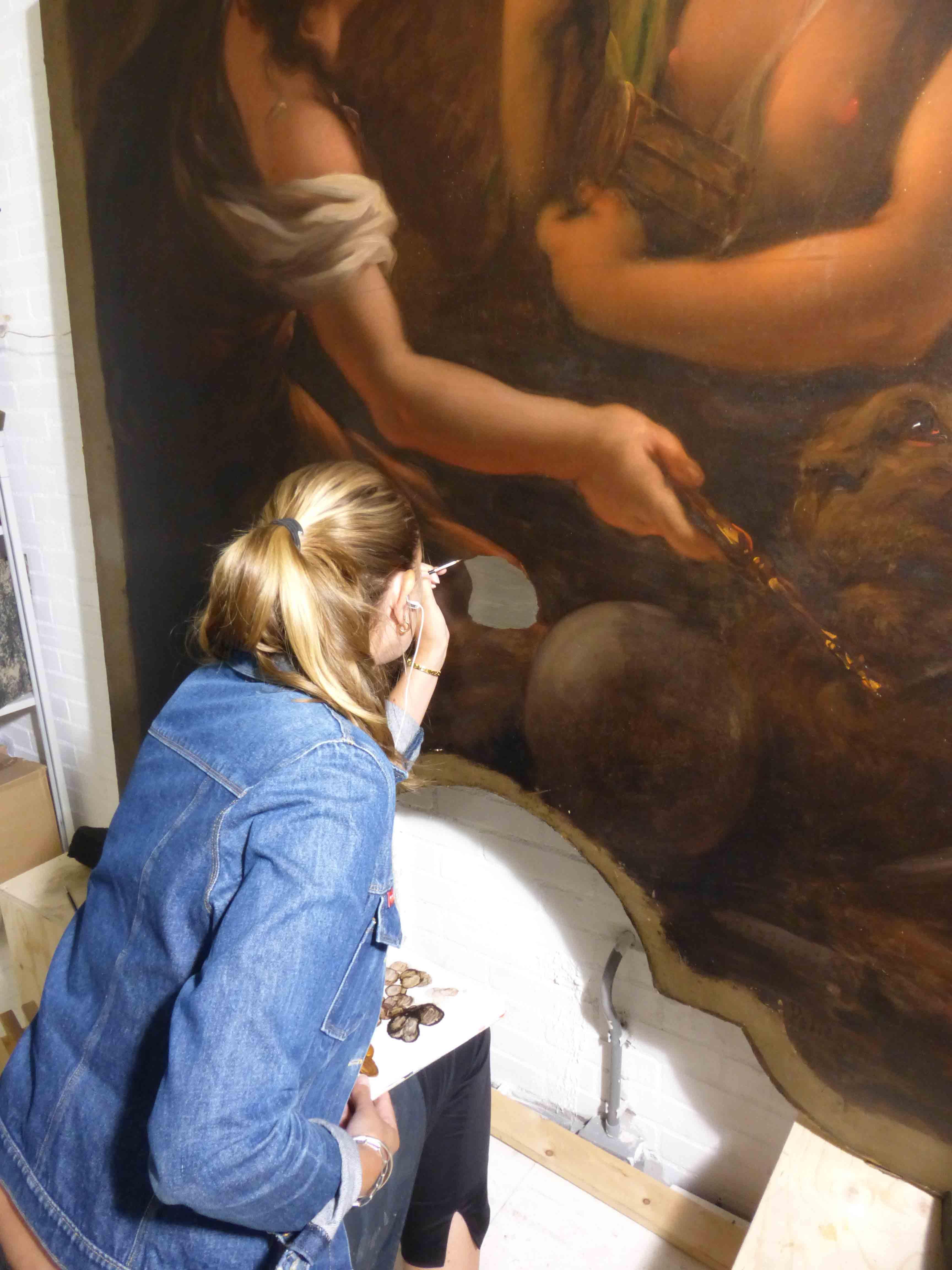 Besides Carol Pottasch, the team of conservators of the Mauritshuis consists of conservator Petria Noble (head of the conservation studio), Sabrina Meloni and conservation / paintings scientist Annelies van Loon. The paintings of the Mauritshuis are treated with great care. The museum’s  conservation studio has an expert team of conservators which is primarily responsible for care of the collection. Since the 1990s, the  Mauritshuis have been carrying out an ambitious programme of restoring a number of the museum’s masterpieces. Restoring a painting, especially a master-piece, is complicated and time-consuming work. Before anything is done, the painting is thoroughly examined using state-of-the-art technologies, to find out in detail information about the material and technical aspects of the paintings, sometimes working with other  experts in the field..In the Mauritshuis the paintings overall are very well preserved. So often one of the most important  tasks in the restoration process is to remove yellowed varnish layers and discoloured overpaint. This  brings to light the freshness of the original paint layers, and can yield some surprising new insights.

Carol Pottasch: "When I was walking around in the Louvre as a 15-year old, a new world opened up for me."