Le Fonds Belval in Esch-sur-Alzette, in the south of Luxembourg organises in 2014 the extraordinary project "Public Art Experience". This important international project is an innovative way of combining art and knowledge and deals with the place of art in contemporary society. Its location is Belval, a historic industrial site, which now hosts the "City of Science", as part of a new urban district developed around former blast furnaces. "Transformation" is the theme chosen for the first launch of "Public Art Experience". This theme resonates with the transformation that is visible in Belval, it echoes the passage from industrial capitalism to the capitalism of the knowledge society. Thus it provides the opportunity to think about the meaning of art as an individual and a collective experience.

The Belval site is located in the south of the Grand Duchy of Luxembourg near the French border. It extends into the local administrative communities, or “Communes” of Esch-sur-Alzette and Sanem. Due to the dominance of the steelworks, Belval suffered from the abandonment of steel production in Luxembourg, and is undergoing an extensive regeneration programme to help diversify the area beyond steel production. The redevelopment plan will turn the brownfield site into a large scientific and cultural centre, including the science faculty of the University of Luxembourg. It is also the location of the Rockhal, Luxembourg's largest music venue, which opened in 2005.

Esch-sur-Alzette is the centre of Luxembourg’s steel industry. The industrial wasteland at Belval is the former site of the Arbed, Luxembourg's steel group which was founded in 1911. In 2002 the Arbed merged with the Spanish group Aceralia and the French group Usinor, to create Arcelor, which in turn merged with Mittal Steel in 2006 to form ArcelorMittal. When Luxembourg’s last operational blast furnace, blast furnace B, was shut down in 1997, an area of 120 hectares in the western part of the site became available for redevelopment, while the remaining part continues to be a production site for the ArcelorMittal group.

Permanent Exhibition Belval & More
Fonds Belval transformed the former « massenoire » building (black-mass building) into a venue where exhibitions and conferences on the projects’ development take place. This initiative provides the public with the opportunity to learn more about the significant “Cité des Sciences” (City of Science) urban project. A large-scale model and a 3D-animated film help the public to visualise the future university district 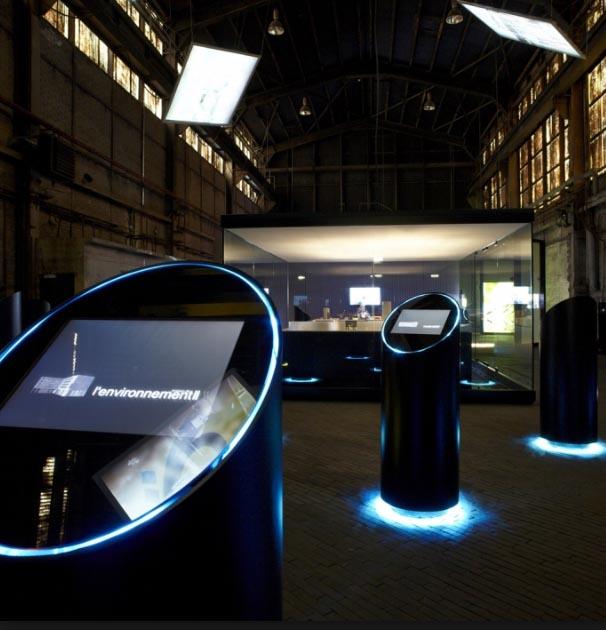 located on the Blast Furnace Terrace. The permanent exhibition « Belval & More » provides also a historical and contemporary overview of the site’s development. Films on the history of the steel industry, urban development and the new facilities are shown in a cinema room.

Fonds Belval regularly organises conferences, debates and temporary exhibitions related to architectural and urban projects, the history of the mining area and cross-border conurbation development. From 18 September until February 2014  Le Fonds Belval organizes an exhibition of the projects participating in the competition for the roof gardens of the university library.

Copyright of the photo on top of the page: Rol Schleich.