VIOLINIST JOSJE TER HAAR HAS HER MUSICAL ROOTS IN CURACAO

"The violin has become the love of my life"

Dutch violinist Josje ter Haar (52) can just barely keep up with all the ensembles and orchestras in which she plays. A thoroughbred musician, her calendar is full, actually overflowing - like her ambition. She wants to, and has to, make music, and in as many different areas as possible. One 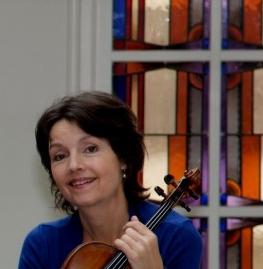 might actually think that Josje ter Haar was born in a violin, since it clearly is her life. “I don’t know what else I would do if I didn’t play violin.”
She caught the spark of this passionate love for the instrument on Curacao, at the age of 9; her brother Job was 7. “We were sitting under the flamboyant tree, and my parents asked us if we wanted to play music and what instrument we wanted to play. Job chose cello. I always say cellists are born, not made. I fell for the violin at age 9. “It would become the love of her life. “My parents went to Curacao for the adventure. My father got a job setting up a school for the deaf and hard of hearing, and my mother also worked in education.” Violinist Josje ter Haar reminisced about her carefree childhood on Curacao with a loving smile. “It was a time of freedom, and it was a fantastic musical environment. My parents  were both amateur musicians and really encouraged Job and me. They had both studied organ and we had all kinds of spinets and harpsichords at home. They also played a lot of classical music on LP. I used to listen to Brahms and a lot of Bach. We also played a lot together as a foursome.”

The Floreal String Quartet is one of the more remarkable elements in the Netherlands’ musical landscape. The flamboyant quartet consists of Josje ter Haar (violin), her brother Job ter Haar (cello), Ruben Sanderse (viola) and Emma Breedveld (violin). Josje is the ’florid’ link in the string quartet. She plays a magnificent old Dutch instrument from 1709, which is on loan from the National Musical Instrument Fund. Many musicians  cannot afford a valuable instrument like this one. The National Musical Instrument Fund finds excellent instruments and loans them to musicians. Josje alternates playing first and second violin in the Floreal String Quartet, and loves it. “Switching between first and second violin is really interesting. You can always take on a different role. As first violinist, you get the pretty melodies, and as second violinist you have to stay more in the background and blend with the first violinist. But for the first violinist, it’s like playing three concertos in a night. The Floreal String Quartet is where we can use our imagination to the fullest.” The quartet plays music from around 1900 connected with the ’Stile Floreal’, also known as Art Nouveau, characterised by sensual, flowing, organic forms often inspired by flowers and erxciting, attractive harmonies. Informed partly by a lively interaction with the popular music of the time, the ’Floreali’ play with expressiveness, freedom and imagination. The musicians of the Floreal String Quartet see it as their mission to revive the Stile Floreal, thereby  making a multi-faceted repertoire accessible for audiences of a century later.

“I learned the basics of violin playing on Curacao.” 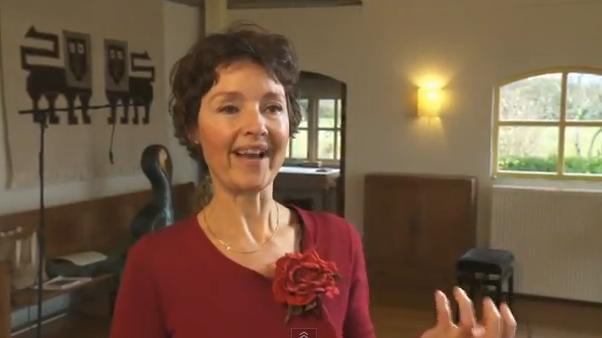 Josje ter Haar: ”I was on Curacao from the age of 7 to 15. We had a violin teacher, Eric Gorsira, who was also a conductor. He’d been hired as violin teacher at the newly founded music school in 1960. He quickly became one of the most dedicated music teachers I’ve  known, a teacher with his own views on music teaching methods.” Josje ter Haar has vivid memories of her former teacher. “Job and I both went there for lessons. It was funny that Job, a cello student, had lessons from a violin teacher. Eric Gorsira was an incredibly passionate violinist, the best known on Curacao. He had a lot of talent. Since he’s quite old now, he doesn’t play so much anymore. My time on Curacao was very important to me, mostly in the musical sense. Job and I performed often in the Curacao Youth orchestra and we also played in Surinam, and on Bonaire and Aruba. By today’s standards, 9 is of course fairly 'old' start taking violin lessons. These days they start as early as 4.” As a 15-year old, once she was back in the Netherlands, Josje went to the advanced secondary school (gymnasium) while also attending the Royal Conservatory in The Hague, taking violin lessons in the preparatory programme. At 19, after graduating from gymnasium, she officially began studying violin at The Hague, where she studied with Qui van Woerdekom, Davina van Wely, (“Even Jaap van Zweden studied with Davina,  and Vera Beths, all famous teachers." Ultimatelty she studied there for 8 years, and graduated ’with distinction’. 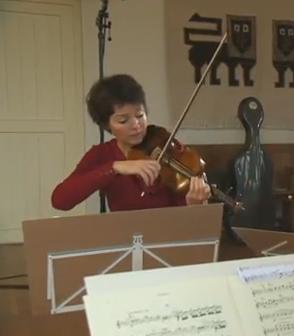 "Qui van Woerdekom paid a great deal of attention to your posture."
"Qui had developed a kind of foolproof violin method, which was his specialty. He developed a terribly comprehensive system for violin technique, in which your posture played an important part. He did exercises that ensured your technique actually couldn't go wrong. I've never had an injury, or been unable to play, because of physical problems. Violinists often have arm or shoulder trouble; there's almost no one who plays without some pain. But I have never had that, thanks to Qui's technique and his focus on posture. I also can take credit for having a flexible body. Only my pinkie finger could be a bit more flexible. But every violinist's hand has its good and bad points. Qui was mostly interested in a relaxed posture, and he made sure your shoulder rest and chin rest were placed right."

"Davina van Wely tried to get the most out of her students."

Davina van Wely is a big name in the Netherlands’ violin history. There’s even a national Davina van Wely Violin Competition for talented violinists aged 15 -17. These young violinists also have the opportunity to participate in activities such as workshops, master classes ensembles. The next one will be in 2015. Davina van Wely had her first violin lessons at age 4 from Arthur Herman Oróbio de Castro, and studied later with Adolphe Poth. She continued her musical studies with Oskar Back at the ‘Muzieklyceum’ in Amsterdam, where Herman Krebbers, Theo Olof, Lola Mees and Dick Bor were among her classmates. She finished her studies in Paris at the Conservatoire National Supérieur de Musique with French violin teacher Line Talluel. In 1984 Davina van Wely was awarded the Hogenbijl Prize for her exceptional service to classical music.

Josje ter Haar has good memories of her former teacher. "I was 15, and simultaneously studying at the gymnasium and taking lessons from Davina van Wely, an hour a week. Davina was an incredibly inspired teacher and she always did more, and worked longer hours than she was paid for. She tried to get the most out of her students. All her life, Davina did an amazing amount of research into the violin and violin technique. She went around and listened to all the teachers. She could play everything; if it was written for violin, it was in her repertoire. But she never performed. She chose to teach. Davina had an unbelievably rich knowledge of repertoire. She made it clear what kind of violinist you had to become."’

"Vera Beths gave me something to hold onto."

Vera Beths received her first violin lessons from her father Gijs Beths. She continued her studies with Herman Krebbers at the Conservatory in Amsterdam. In 1969 she won first prize in the Oskar Back National Violin Competition, then went to New York where she studied with Ivan Galamian. Her wide musical interest has given Vera Beths a varied and vast repertoire. She performs regularly with several Dutch symphony orchestras, playing a Stradivarius violin from 1727. Josje ter Haar had lessons with Beths for three years. "‘She was passionate and also incredibly disciplined. I’m also very disciplined and am always prepared, so it clicked between us. She gave me something to hold onto. I also studied a lot of sonatas with her. Vera not only gave you something to hold onto musically, she also gave you honest, blunt opinions. That was great, you could use that. I really lived for those moments. Vera was at home with every style. She also did a lot of new music and a lot of early music, like baroque music. She’s married to Anner Bijlsma, the baroque cellist in the Netherlands. So Vera’s given me loads of background information about early music."’

Ives Ensemble’s mission: "Learning to listen all over again." 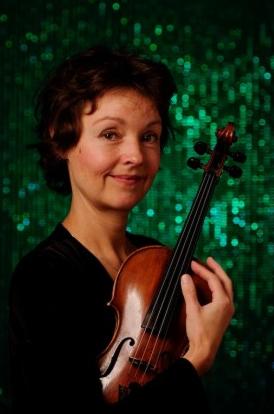 Josje ter Haar has played with the Ives Ensemble ever since its inception in 1985 (making 28 years), playing chamber music in its purest form. Taking its name from the famously original American composer Charles Ives, the ensemble continually seeks out unusual music. With one foot in the 20th century, the other in the 21st and with eyes and ears on the 22nd, the Ives Ensemble plays historic music from our time, music that in future we’ll value as our cultural heritage. The ensemble has commissioned music from legends like John Cage and Morton Feldman. Now as well, they work with leading contemporary composers and artists. Using Amsterdam as a home base, the 12 musicians travel throughout the Netherlands and abroad with programmes that help audiences learn to listen all over again. Josje ter Haar has made many CDs of modern repertoire with the Ives Ensemble. Examples include Block Beuys by Richard Rijnvos, the monumental Second String Quartet by Morton Feldman, chamber music by Aldo Clementi and several works by John Cage. Josje has also worked with some great conductors. "Chamber music is one of my great passions. 'Block Beuys' was composed by Richard Rijnvos, who was inspired by the German artist Joseph Beuys. Richard was in the Beuys museum and was really impressed by a number rooms filled with his works. He thought they were so wonderful that he based the piece on them."’

Josje ter Haar also played for several years with the now-defunct Strijktrio Holland (Holland String Trio), along with her brother Job (cello) and Suzanne van Elst (viola). "’There’s much less repertoire for string trio than for string quartet. We won a few prizes at the Hennen competition and in Australia, at the Melbourne International Chamber Festival. But we ended up stopping. There is a classical string-trio repertoire, including five beautiful Beethovens and a huge 'hermetic' piece by Mozart that lasts an hour. But it’s insanely difficult to play as well as to listen to. We did play it, but it was very tricky, we fought really hard to get through it."’

For many years, Josje ter Haar has been a member of the Radio Philharmonic Orchestra, where she plays first violin. The orchestra has worked with some famous conductors including James Gaffigan and Jaap van Zweden. "‘A conductor who stands before the orchestra is the coach of that orchestra. So the better the conductor, the more the orchestra learns, and the better everybody plays. I also learnt a lot from Jaap van Zweden. Jaap has wonderful ears and hears everything so he can give you really good feedback. The Radio Philharmonic has often played world premieres. Our regular venues are the Concertgebouw in Amsterdam, Vredenburg in Utrecht and sometimes also in Arnhem. And we go on tour sometimes. The orchestra distinguishes itself by programming unusual symphonic concerts."