"In Uganda we did not have fine arts in the past" 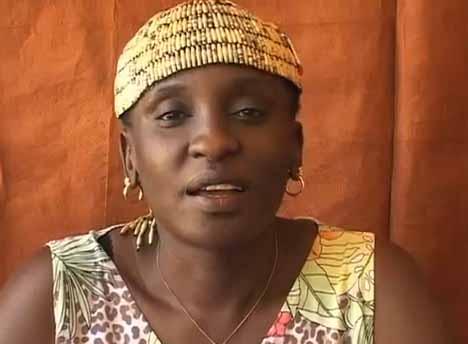 When Lilian Nabulime stands in front of the grave where her beloved husband Edward Kitaka Kizito is buried (Edward died of AIDS at the age of only 45, in 2005), next to the grave of his brother Job, Lilian appears to be a strong woman. Although she has suffered a great deal, she carries her grief with dignity and her most powerful weapon against AIDS is art. She fights for herself, her husband and so many other Africans who have died of HIV/AIDS. The Ugandan sculptor seems to be made of iron, because although being in deep sadness at times, she has found a way to fight the disease. She is an example to many African women, because through her sculptures and use of everyday objects, she sends messages to the women of her country, in order to inform and educate them on HIV/AIDS and sexual dangers. Lillian Nabulime says: "I want women to be emancipated and educated through art. I am using my sculptures to fight HIV/AIDS, because, having lost many close relatives to AIDS, I feel it is very important to develop sculptures that have the power to make people reflect upon this issue and avoid being infected. After 20 years HIV infections remain high and there is still no cure. I made my Transparent Soap Sculptures in 2004 (see project below) to make people aware of the dangers." Besides being a weapon, art is a means of commuinication for Lilian Nabulime, because most of the women in Uganda are illiterate and do not understand written educational materials. 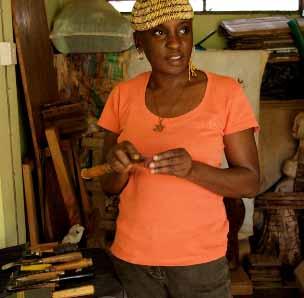 Dr. Lilian Mary Nabulime, born in Kampala in 1963, is one of the few female sculptors in Uganda. She was awarded a Master of Fine Arts, with a diploma of education, from Makerere University and has a PhD from the University of Newcastle, UK. She has been an artist for the last 15 years. The Ugandan sculptor works with soap, metal, wood and other materials to create unique and stunning sculptures. She has also worked on a combination of metal sheet and wood, creating monumental sculptures out of tree roots which transform into meaningful sculptures that clearly carry a message. Lilian Mary Nabulime is a senior lecturer and former Head of the Sculpture Department at Makerere University of Kampala, Uganda.
"My PhD research was a great experience throughout, studying the role of sculptural forms as a communication tool in relation to the lives and experiences of women with AIDS in Uganda. I gained a lot of experience making sculptures as powerful weapons that can address political, social, cultural and health-related issues." Her PhD research sculptures aim to raise awareness among African women and promote discussions about sexual practices and safety, overcoming taboos. Through her artwork Lilian Nabulime is involved in a courageous fight against HIV/AIDS, one of the greatest plagues which is torturing many countries in Africa today and has done so over many decades.

Working with soap - The symbol of cleansing and treatment of infections

Soap art (photo above) occupies a special place in her work. In her struggle against AIDS Lilian Nabulime developed art forms using objects which are familiar to the Ugandan context, such as shields (symbolising protection), bowls (referring to the female anatomy), as well as knots and nails, representing the suffering of those infected by HIV/AIDS. Since 'ordinary' sculptures were not used by AIDS-related organisations in Uganda to educate people, Lilian Nabulime continued her research on artists who had successfully worked with problems such as AIDS, in particular the Cuban artist Felix Gonzales. Lilian then decided to follow another strategy. She stopped making artwork in the shape of bowls, which worked well on a symbolic level, but were too time-consuming to replicate. Instead, she concentrated on making sculptures from soap, which is a cheap material, easy to produce, and a symbol of cleansing and treatment of infections. Sexual symbols and forms were also a crucial part in her soap sculptures. Male and female genitalia were fashioned by Lilian from translucent soap and were displayed upon a white table, facing each other, looking like an erotic chess game about to begin. Lilian: "The great significance of the transparent male and female sculptures is that it focuses on male and female genitalia as the most important sources of HIV infections. It encourages both men and women to discuss an issue that is a taboo. Men have to be encouraged to get involved in strategies that fight HIV/AIDS." 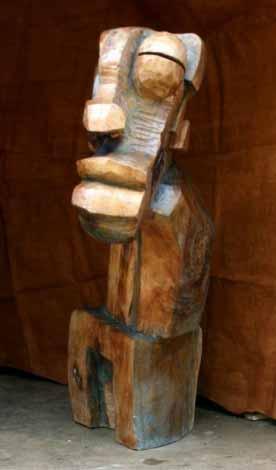 During her Master's study (1989-1992) Lilian became intrigued by the structure and material of tree roots and she started making root sculptures. "The experience with root sculptures enabled me to work 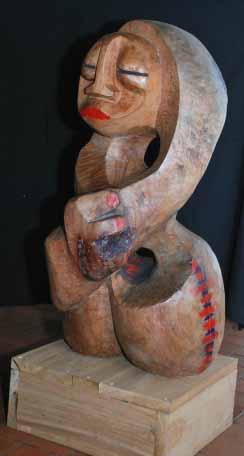 on different shapes of wood and to use the various materials I came across. Discovering tree roots was a great experience. As I worked on them, I discovered that they had unique forms which had to be studied in order to derive artistic inspiration. Each root is unique, because it grows underground where it finds obstacles to fight and struggle against, ending up in different forms. Roots are very expressive gnarled forms which infused me with strong emotions."

Carving tree stumps has become Lilian Nabulime's trademark. Taking inspiration from the original form of the tree, she uses power saws, mallets, gouges and chisels to create her highly original, elegant sulptures, which often represent elongated women's heads. Lilian likes to incorporate metal on wood and also works in other materials like clay, plaster of Paris and metal castings and finds inspiration for her sculptures in nature and the people she meets. Through her art Lillian wants to educate people with strong messages to liberate both women and men. 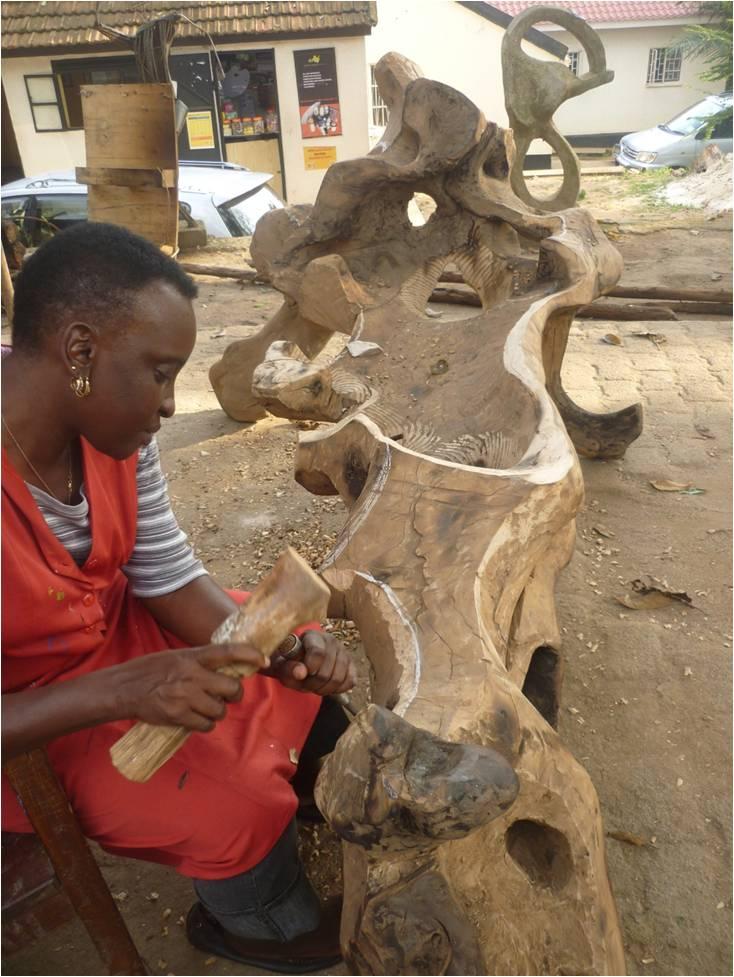 Lilian adds: "Through art one can effectively communicate social and political messages across a diversity of tribes with languages and cultural bases. Sculpture today is my best form of expression. I enjoy my life as an artist, mainly carving wood, although I never thought I would continue to be a practicing sculptor after my Masters."

Photo left: Tree stump with roots getting finished, turning it into a utility sculpture (a table for 6 people - January 2014). It was burnt to eliminate the weak areas and colours and remove insects attacking it. When carving trees, Lilian Nabulime selects a trunk, searching for a motif in the stump. She carries out her sculpting by carving wood from the tree with a power saw, gouges and chisels, achieving elongated or monumental sculptures. Her sculptures feature a dynamic and organic rhythm that follows the grain and growth pattern of the tree and often produces a feeling of spiritual movement. While carving, Lilian always respects the integrity of the natural form of the tree.

Her roots are in Africa and she received her training as a sculptor at the Margret Trowel School of Fine Art, Makerere University in Uganda, where she gained her BA and Masters degree. The training followed the British system as the founder in ther 1930s was British. Her PhD was awarded at the University of Newcastle, UK,  and she has matured through exposure to the work of artists in international workshops and exhibitions not only in Africa, but also in Europe and America. Her national and tribal culture has no significant sculptural background. The PhD in the UK was practice-based and greatly strengthened her sculptural forms, thoughts and ideas. Other sculptors who have inspired her are mainly Joseph Beuys, Louise Bourgeois, Felix Gonzalez-Torres and Henry Moore. Her sculptures, especially the figures, may look African, but their production is universal or cosmopolitan.